5 Reasons to Cave Dive in Indonesia 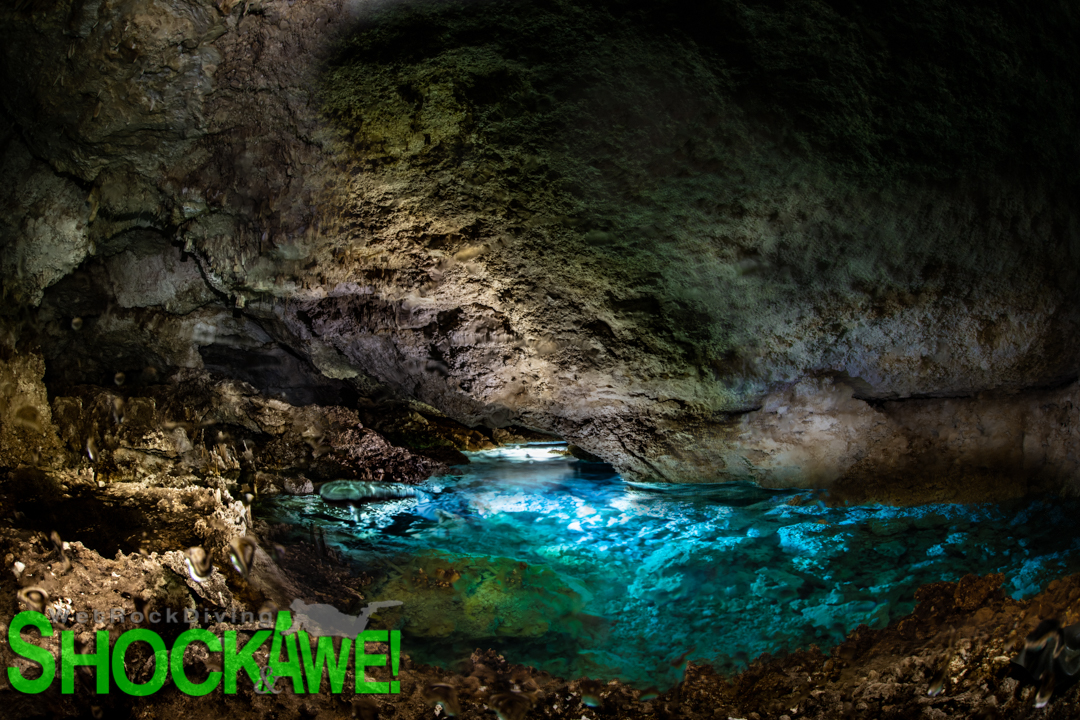 There  are so many  reasons  why you should  come and cave dive in Indonesia. Let us tell you 5 of them!

Being a cave diver often means  having a sense  of adventure  and a taste for experiencing new things, so why not travel to Indonesia for your next cave diving holiday ?

If you’re thinking that now might not be the right time to travel, come on! You’ve probably been diving in muddy tunnels, cold waters, sometimes with zero visibility, passing  tiny restrictions  that would freak any claustrophobic  out … so don’t tell  us you’re afraid to jump on a plane (or maybe 3!) to discover a new destination! (We’ve put everything in place to respect international travel regulations and social distanciation of course). 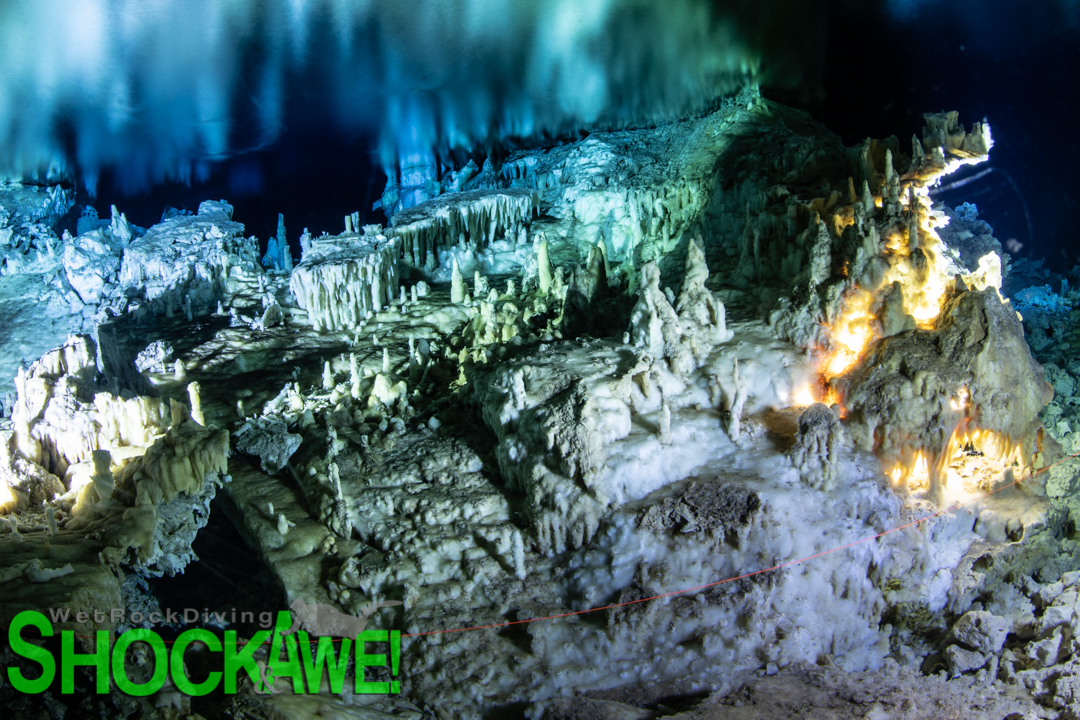 Cave Diving in Indonesia is a fairly new activity. Even though the Scuba Diving Industry is  booming and the country receives thousands of open water scuba divers every year to dive its most iconic spots (Komodo, Raja Ampat, Bali to name some…), almost nobody knows that Indonesia is becoming a hot spot for cave diving in South East Asia. The first record of cave diving exploration  was in 2007 when  an international  team of biologists  and cave divers came to Sulawesi for a scientific mission  and unraveled  quite a few caves. Since then a few explorations have been conducted by different team before we landed in the Sulawesi Tenggara in 2016. From this year until now we’ve spent most of our free time exploring, diving and mapping underwater cave systems until October 2019 when we decided to start the Sulawesi Dive Trek and create the first Technical / Rebreather / Cave diving center in the area.

Visit  the Cave Diving section on our website for all information about Cave Diving Trip and Courses.

2) Indonesia: a new spot to add to your (too short) cave bucket list. 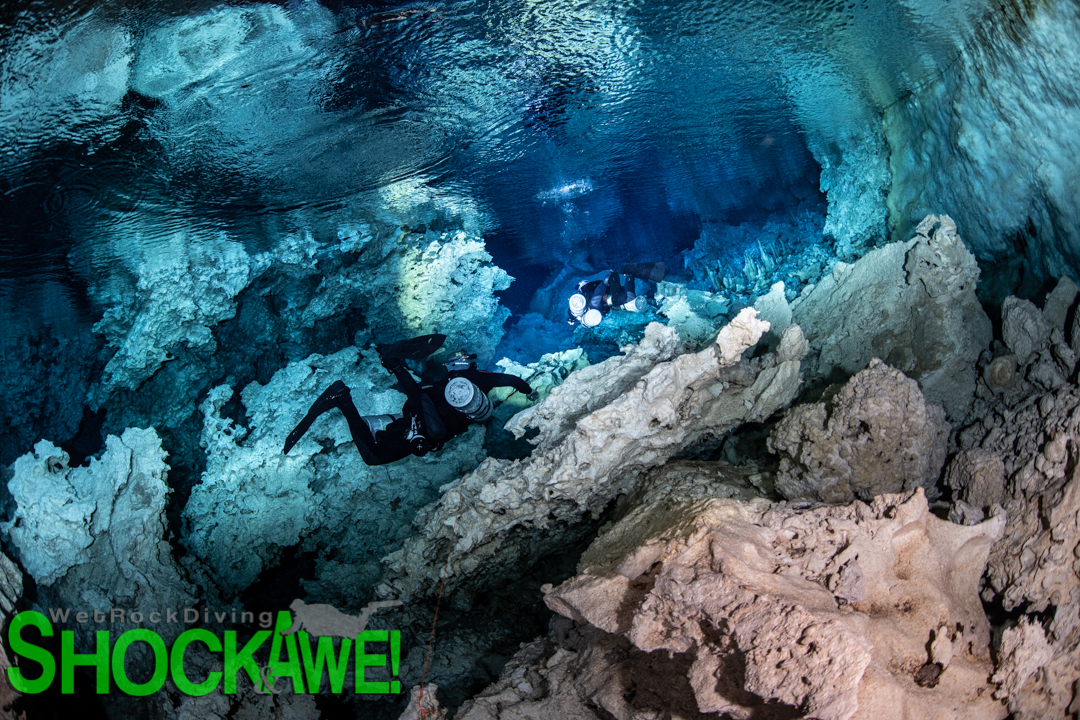 As an avid cave diver, you’ve probably been travelling  a lot to fulfill  your passion. Among the top world famous spots, many of us have been to Mexico, Florida,  the Lot region in France, and probably other places  like the  Bahamas, Thailand, Hungary, Spain and the Philippines  for the most adventurous! These spots are on every cave diver’s bucket list and, like every cave diving addict, we’ve been on each of these destination a fair amount of time and are always craving for new destinations to experience.

Well , good news ! You can now add Indonesia on top of it! With more than 20 systems  opened  to cave travelers ranging from cavern to caves requiring multi stage or even rebreather and a huge diversity of cave types  you will  hardly get bored by this amazing location. And did i forget to say that and a few hundred  are still yet to be explored ? 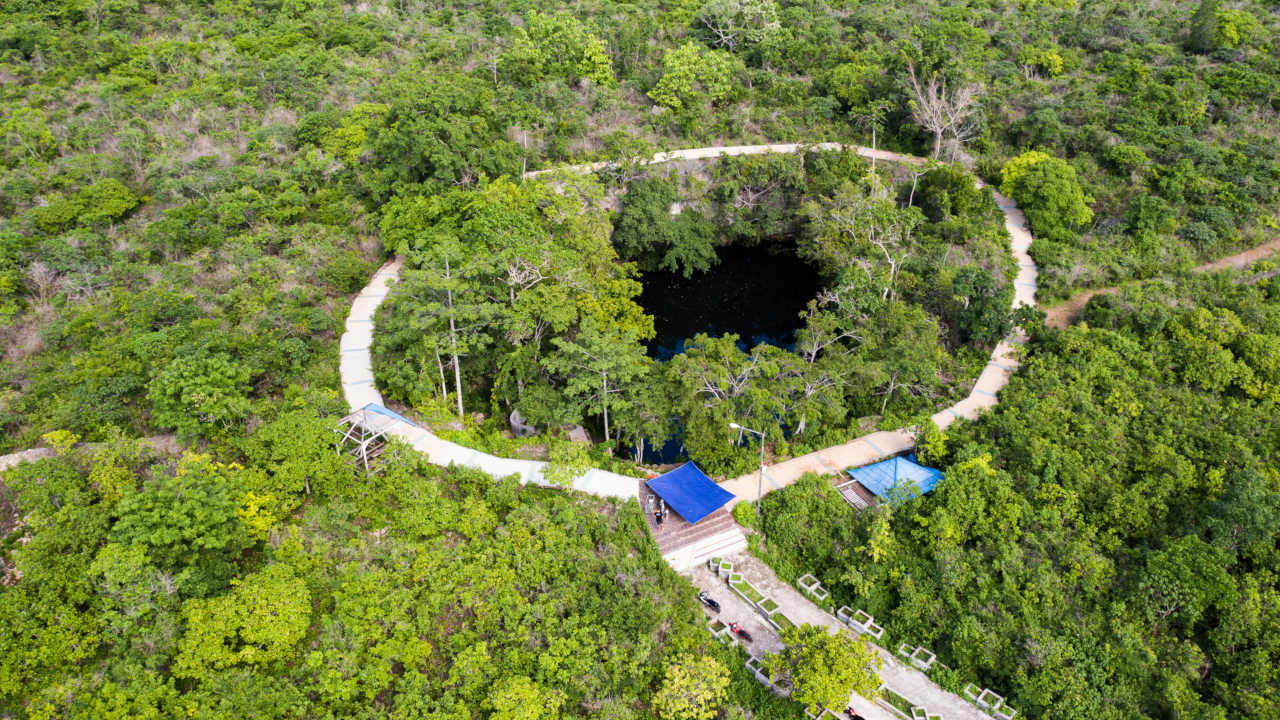 Entrance of a Cave in Buton, shoot by a Djl drone. Photo by Pete Mesley.

For the numbers, Indonesia   is 5500km long, has more than 17.000 islands, 700 dialects and around 400 different ethnic  groups. Cave wise, Indonesia  has  an estimated 150.000 square  kilometers Karst surface area, spread  across  the whole  country.

At Sulawesi Dive Trek, we’ve been  exploring the Sulawesi Tenggara province for the past 4 years, poked our heads in a couple  hundreds of cavities, from the smallest dirty pound to the biggest gigantic sinkholes with hundred meter high walls. We’ve had many disappointments (explorers will understand what I am talking about) but we’ve been awarded a few times with incredible discoveries: fracture caves, sea springs, shallow intimistic maze-shaped caves, outrageously deep prehistoric sinkholes, incredibly decorated and crystal-clear dissolution  caves! The diversity of caves in the area is just mind blowing and  turns every exploration  trip into a very exciting  adventure!

And guess  what, you can be the next explorer as there’s more than a hundred other unexplored places! And we’re only talking about one province! We have yet to discover South Sumatra, East Java & West Papua. The potential  is such that we surely won’t have enough of a lifetime to totally explore them. So, if you are an avid adventurer and want to join one of our exploration trips or just make one of your own, now is the best time! Click Here for more information about our past or upcoming explorations.

4) Indonesia is the best place to combine cave and ocean diving! 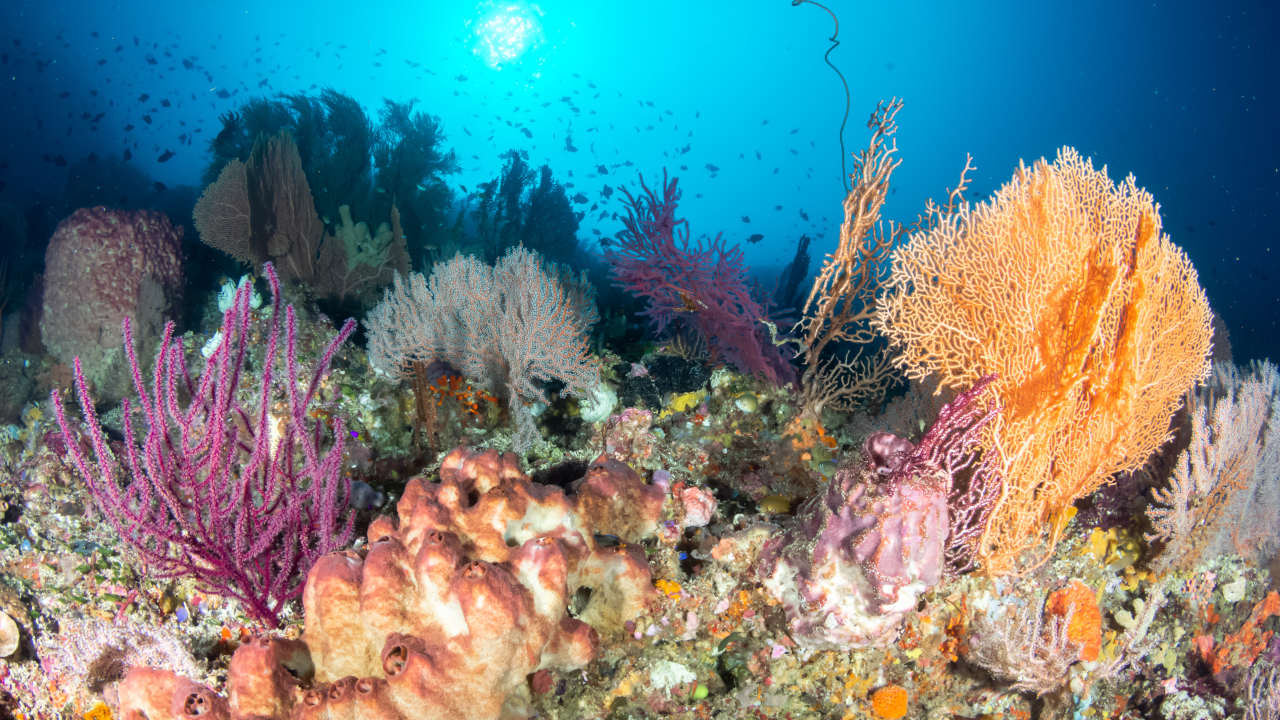 Not going to lie, many of us also enjoy  chilled  dives  on beautiful  coral reefs (and some of us just hate the idea of being compromised with dirty fishes)  and  Indonesia is known to be  the best country when it comes to open water diving. Situated in the heart of the coral golden  triangle, you’ll  find the biggest  biodiversity in the world  and  pristine  reefs.

Wakatobi  National  Park (located in South-East Sulawesi, Indonesia  between  the seas  of Banda and Flores) is the third largest marine park in Indonesia  and was named « Underwater Nirvana » by  Jacques Cousteau. The 900,000 hectares of coral reefs host the highest numbers of reef corals and fish species in the world, respectively  750 coral reef species  (out of 850 in the world) and  942 fish species, among which you will  also  spot dolphins,  turtles,  whales,  sharks and a wide  variety of rays.

And cherry on the cake, it is next door from our amazing caves, so you can definitely think about organizing a trip that would combine fantastic cave diving with top class  reef diving. No other  place in the world  will  give  you this opportunity. 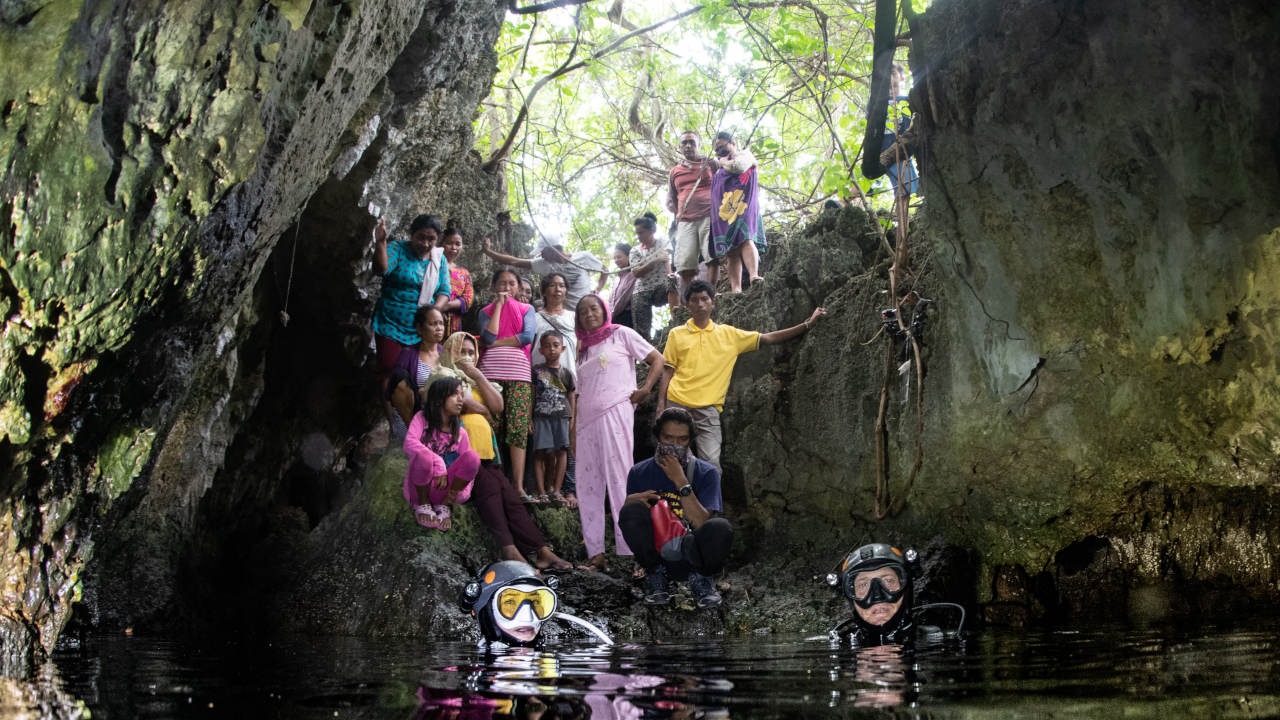 People gathering around the cave to follow and help exploration. Photo by Pete Mesley.

What makes Indonesia  such a nice travel destination ? There’s  only one answer: diversity.

Overall, the locals are all very welcoming and deeply nice. Whatever their religion and their culture is, they will always welcome you with a warm smile and true generosity. They are always helpful with tourists and will bend over backwards to make your life easier, making it probably one of the safest countries in the world for travelers. You will definitely enjoy every minute of your time there. (Lonely Planet is a good source of information for new travelers).

These few reasons should already be enough to make you want to discover this new amazing cave diving location. Feel free to contact us if you have any more questions or want to plan your next cave diving trip. Due to the remoteness of the place, all our trips are tailor made and we will do everything we can to offer you the most memorable cave diving adventure of your life !