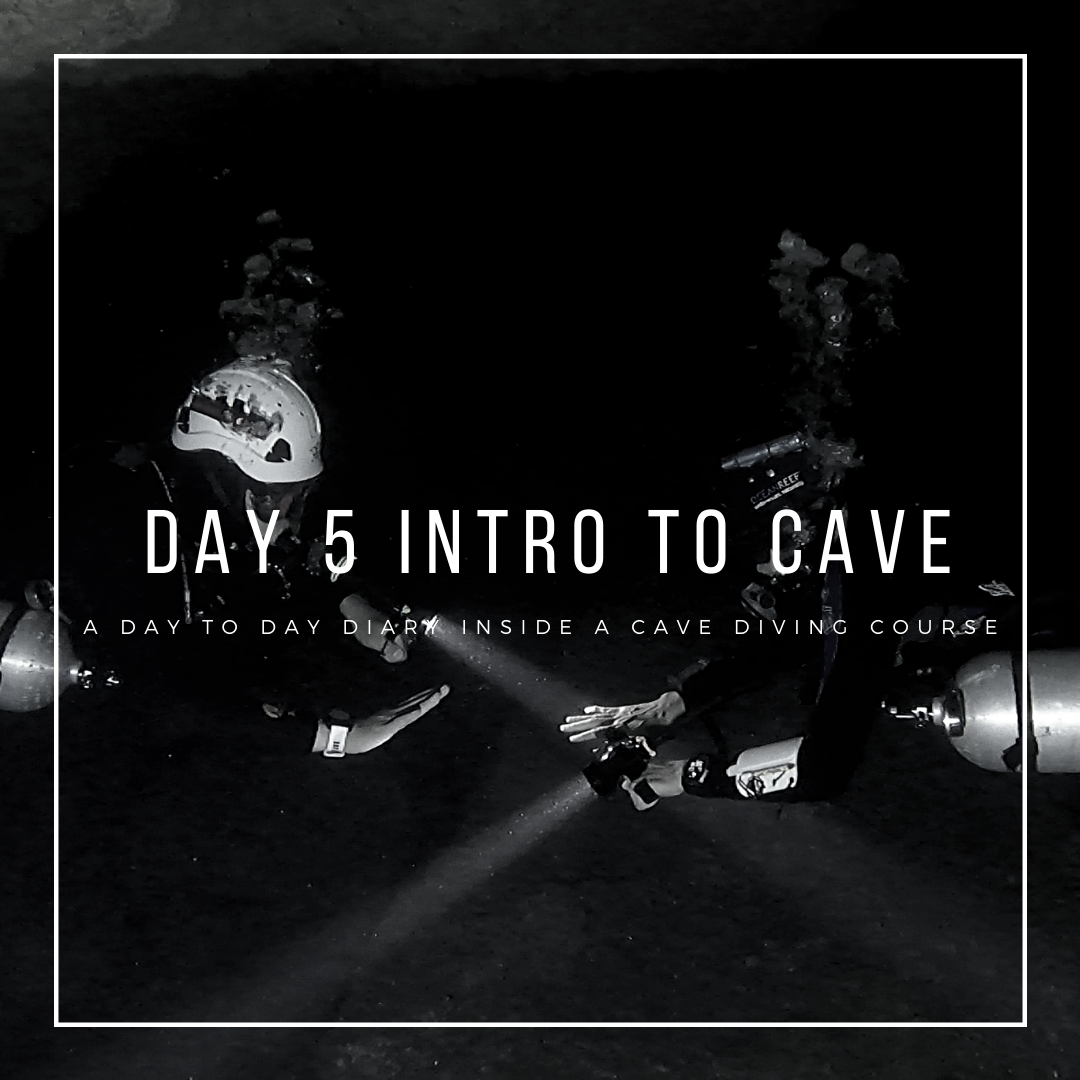 Today my students died… Well not actually, but a mistake has been made that could have led to a very serious situation, or even worse one or two fatalities. Believe me or not I am very happy when this happen in my classes, it is a perfect occasion to reflect on mistakes and avoid them in the future.

The day started under a cloudy sky with a cup of coffee and some auto evaluation. For the first time, the students actually recorded a decrease in some of their grades. Now they are more conscious about their strengths and weaknesses. This is a very important turning point to further progress towards excellence.

As we progress toward the full cave level, the theory part become lighter while we’re increasing the pressure and performance requirement on underwater skills. Today’s main theme was line entanglement and line repair.

First of all, how would you react when entangled in the line? This is one of the most common issues for beginners in cave diving. Due to their unperfect buoyancy and trim, their lack of precision when it comes to movement and streamlining equipment, they do get entangled in the line. This can be avoided by dealing with the reasons I just quoted but it just does happen.
Now you’re caught in this bloody line. What do you??? Well…you try to set you free. No, you don’t pull harder or the only thing that’s going to happen is that you’re going to break the line and the small inconvenience will turn into a major problem.
You just calm down, try to feel where the line is caught and be rational. It is usually stuck at preferred site: the clamp on your tank, caught by a bolt snap or double ender, on your valve, your reg, your dangling things (I can see you!) etc. etc. Follow it, feel it and think about it. Be the line and see where you would like to snuggle with the diver.

Once you realized that you can’t free yourself and your buddy is absent (booooooooo) you need to act. Its presence would have been very helpful cause he could have had a look and easily free you up. But obviously that is not happening, he is nowhere to be found. Now you realize you’re on your own.

There are several techniques to cut the line and repair it. Each one them has been discussed in the course. Some of them consists of doubling the line so you’re actually never left with a totally cut broken line, some of them are more radical and will temporarily cut the route.
The only thing you have to know now is that cutting the line is no joke. You’re temporarily potentially breaking the continuous guideline for any team that is upstream. This should only be done when no other solution is possible. Before doing so make sure you keep the exit side with you and cut it upstream. Then repair it as soon as possible. DO NOT LET IT HANG THERE, that would be criminal.

The dive today was indeed focus on that skill but started more quietly. I usually let the students perform a quiet and eventless dive at the beginning of the water time. It is important to let them enjoy the cave and not only doing drills drills drills drills. Performing a dive, with a set plan is actually also a drill. This moment is when you notice that the debriefing and the hours spent watching yourself doing stupid things on video had been useful. We surfaced after that, had a small talk and got back in the water.

Came the drill time. Today we had to review again Back Kick. There is no way you could get certified as a cave diver without mastering this particular one. It is very useful when you need to backoff without having to literally turn around. It is usually one of the most complicated propulsion techniques to acquire but with a little bit a preparation, repetition and video watching it usually comes pretty quickly. And indeed, today was a groundbreaking progress. Hard work pays!

We then spent quite a lot of time facing each other and retrieving any pieces of equipment clipped on our back. Spools, reels, back pouch. Clip retrieve clip retrieve clip retrieve. The point is to build up muscle memories while maintaining a perfect trim, buoyancy and position related to your buddy. I’ve noticed during the past few days that sometime the students were losing focus on their trim and buoyancy while accessing their equipment. This mistake can lead to silt up situation, line entanglement and a whole array of disaster. Hence, we spent this time fixing things that needed to be fixed.

We worked also a bit into the “bump and go” blind exit. A different technique from the touch contact where you only reunite at tie-off and give your buddy a bump, meaning he can go to the next tie off and wait for you. This technique is usually faster and less messy than the traditional touch contact but it means that for a brief period of time you’re on your own. That’s why it can only be done with Sidemount or true redundant system where the chance of losing both of your tanks is close from zero.

And eventually we switched back to touch contact and out of air with no visibility. And that’s where things got ugly. Diver number 1 (the Out of air one, further named the receiver) was struggling to maintain its buoyancy while swimming towards the exit. He was constantly in negative buoyancy, hence swimming under the line and even worse being suspended to the line. This is a very dangerous situation as you could break the line or…and that’s what happened, go under the line and loop the long hose around the line. Result was, at the next tie off, diver 1 could pass over the tie-off, but the long hose connecting him to the donor was blocked by the loop it was doing around the line.
Game-over.
At this point imagine two divers blind, one being in stress mode ++ receiving air from someone he can’t even see. Now those guys feel they can’t move forward and can not see why.
They tried and tried for a long time to figure it out but impossible. At this point the only solution available would be to:

Not an easy choice. But the beauty of this incident was that it happened during training under supervision. It gave us a very good insight about all the consequences of what seemed a minor mistake: a simple lack of buoyancy.

Training offers the amazing possibility to fuck up, to screw it up, to fail, to do things badly. And that what we’re expecting; so, we can learn from our mistakes. But for that, it is important (and I repeat myself) to create a safe vibe in the team where everybody can share and discuss about their mistakes or their buddies mistake without fearing of being judged or badly criticized. That’s what we do in our classes and we are proud of that. So do not fear not being not good enough, training is always a way to improve, and learning is a continuous process that never ends. Do not wait and enroll in a cave diving course!!

If you missed it you can read Day 4’s report here:: https://www.sulawesidivetrek.com/index.php/2022/04/26/day-4-introductory-cave-diver-course/Day