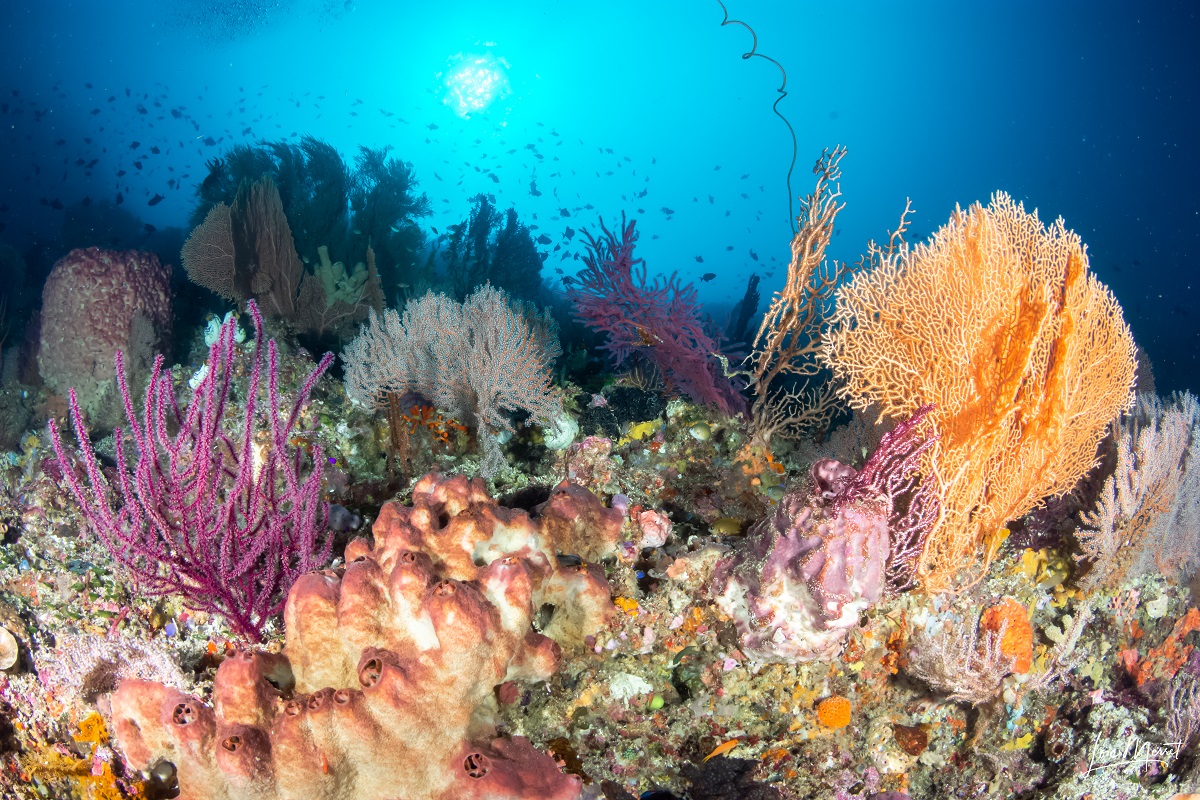 Under this mysterious name that every diver / traveler has already heard at least once in his life. It inspires exoticism and wonderful dives and is the name of a string of islands in Indonesia. It is still hidden away from the main tourist circuits but who will reveal its wonders to whoever dares to travel to the distant province of Sulawesi Tenggara (South-East Sulawesi).

The name Wakatobi is an acronym formed from the name of the 4 main islands that make up this archipelago, as is:

In addition to these 4 main islands, Wakatobi has a total of 150 others, most of them uninhabited. The total land surface of the archipelago is about 500km² for around 100.000 inhabitants. 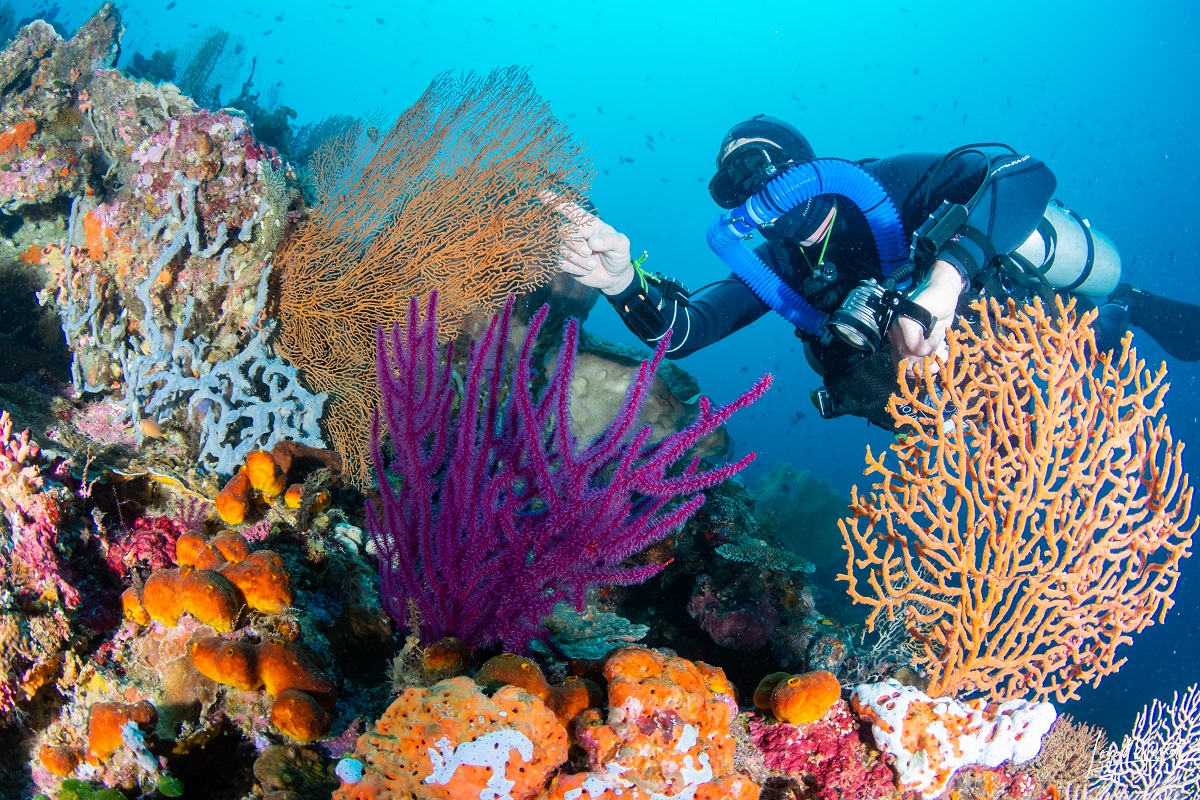 This magical acronym also designates the Wakatobi National Marine Park, established in 1996 and spreading across 1.4 million hectares. Third in the country by size, it is classified as a UNESCO World Biosphere Reserve and is a candidate for membership in the famous World Heritage of Humanity list.

The term world biosphere reserve is not misused, and Jacques Cousteau,the famous underwater explorer, was right about calling Wakatobi an underwater nirvana. The figures are impressive: 942 recorded species of fish as well as 750 species of corals (out of a total of 850 worldwide, or 89% of the world total). The archipelago has 25 groups of coral reefs in the form of dashing reefs, barriers or atolls. There is something for every taste ! The assembly of these numerous reefs form the second largest barrier reef behind the very famous Australian barrier reef. The 4 main islands themselves, are ancient coral reefs, and their soil is composed of limestone rock, which makes them the perfect ground for the development of submerged underwater networks. And indeed, the Wakatobi archipelago also conceals many freshwater caves, modeled on the Mexican Cenotes. 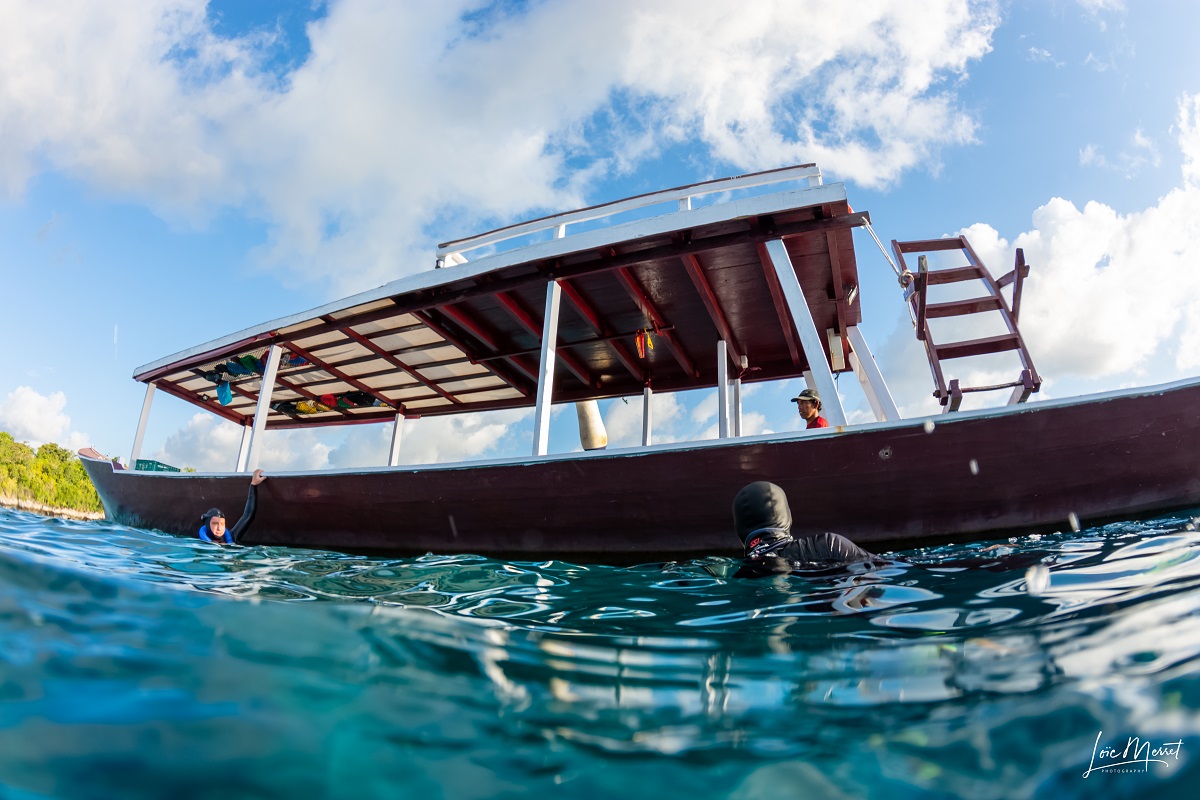 Our Diving boat in Wakatobi.

The path to nirvana is never easy, and Wakatobi is no exception to the rule, respecting this dogma of the modern world: the more difficult a place is to access, the better it is preserved.

Although the main island Wangi-Wangi has an airport (Name Matahora, code WNI), access is not easy. There is a daily round-trip flight to Kendari, the capital of Sulawesi Tenggara province. This flight arrives in Wakatobi at the end of the afternoon and leaves there early in the morning with the company Wings air. Rumors are that very soon a flight with Garuda is going to open from Kendari. Due to the current situation, times and availability vary, the best way to book these internal flights is to use the Indonesian flights search engine www.traveloka.com. The reliability of this site is no longer to be proven, payment by credit card is possible and customer service is efficient and responsive. Passing through Kendari is therefore compulsory to reach Wakatobi by plane and this large city is then directly linked to the biggest Indonesian cities by several daily flights.

Note that Wings and Lion air (same group) prices are very attractive but do not include baggage which must be paid in addition. Despite its past bad reputation, a lot of effort has been put into the punctuality and safety of these companies which have now exited international blacklists.

For travelers less in a hurry, access to Wakatobi is also possible by boat from the neighboring town of Baubau, which is easier to access because it is connected 4 times a day to Makassar by plane.

Finally, the main islands of the archipelago are connected to each other via networks of slow and fast boats which run several times a day. Our dive boat can also take you from island to island during our seafaris. 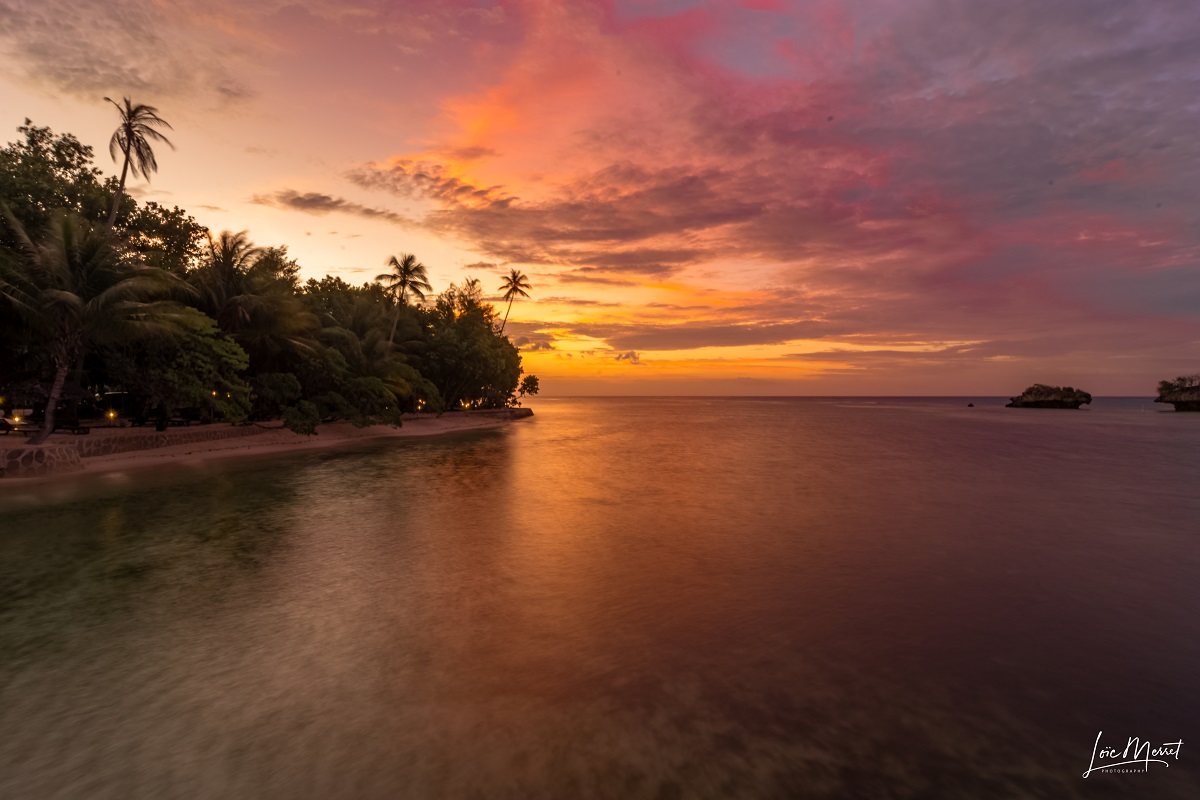 On Wakatobi, diving is open year round. The numerous dive sites are positioned on both sides of the archipelago, which means that when some are inaccessible due to the conditions others are.

The archipelago is located just south of the equator and has a relatively stable tropical climate with an average of 32°C (90°F) throughout the year. The ideal period for diving is between March and December, which corresponds to the dry season. The months of July and August show a slight drop in temperatures and visibility, the winds are stronger and the sea a little more choppy. On the other hand, it is the period of coral reproduction and the waters there are more full of fish than usual.

January and February are the two most rain-prone months, although less violent and marked than in the rest of the country. It is said that it rains on average 4 times less in Wakatobi than the national average. Diving is still fully practicable during this period and visibility is hardly affected as there are no rivers that flow into the ocean.

Finally, winds blow alternately from the east between June and October and from the west between December and April; November and May being the months of transition. These winds can affect boat access as well as navigation to dive sites.

Eventually, we will be able to take you diving all year round and if the sea is really not accessible, our Cenotes are never subject to climatic conditions and remain open to the most adventurous divers. 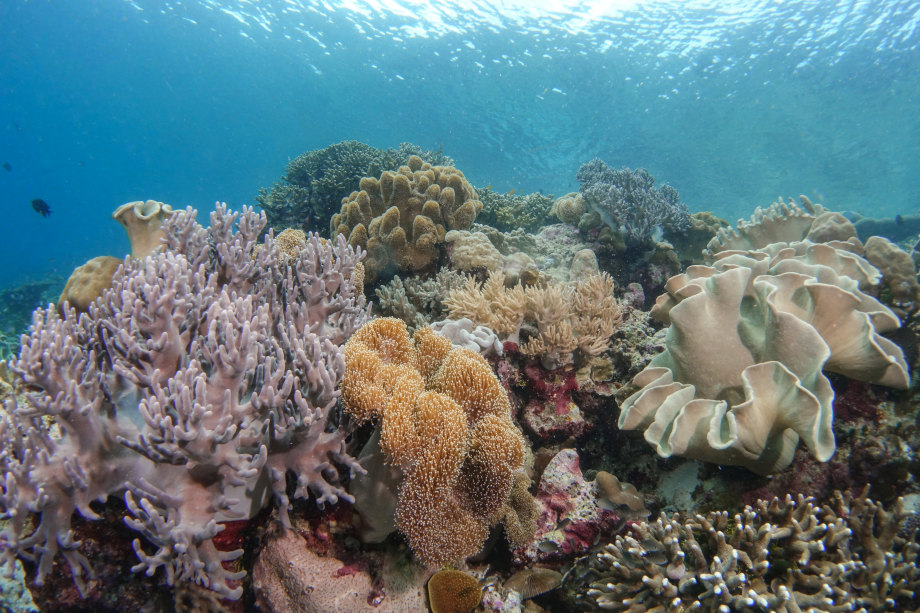 On Wangi-Wangi, there are many accommodation options. From the small Guest house at 100,000 IDR per night (around 6 €) without air conditioning or hot water to the luxury resort at 2,000,000 IDR per night with all the expected comfort (around 120 €), there is a choice for all budgets . Again www.traveloka.comor www.tiket.com are the sites of choice to find and book your accommodation. Be aware, however, that many accommodations, especially for backpackers and tighter budgets, do not appear online. Our diving center will welcome you with pleasure in its adjoining guest house at IDR 250,000 per night (Air conditioning and cold water). We also offer packages including Dives plus Accommodation. Do not hesitate to contact us if you would like more information on booking your accommodation on the archipelago.

The other islands of the archipelago have fewer accommodation options but enough to accommodate the more adventurous travelers. We work with partners across the archipelago so don’t hesitate to contact us if you need advice!

The culinary culture of Wakatobi is of course inspired by the sea products. The archipelago is home to the Bajo people, great fishermen, and the majority of the inhabitants derive their resources from the sea. Artisanal fishing is practiced and regulated by the park authorities so that the fishery resources are well managed and are renewed naturally. No fishing boat from outside the archipelago is allowed in its waters and each village is responsible for access to its waters.
There are many local restaurants available to you and the prices are incredibly low: between 1 and 2 € for a meal. Note that there are no “western” dining options on the archipelago, but the freshness and flavors of Indonesian cuisine will satisfy all stomachs! 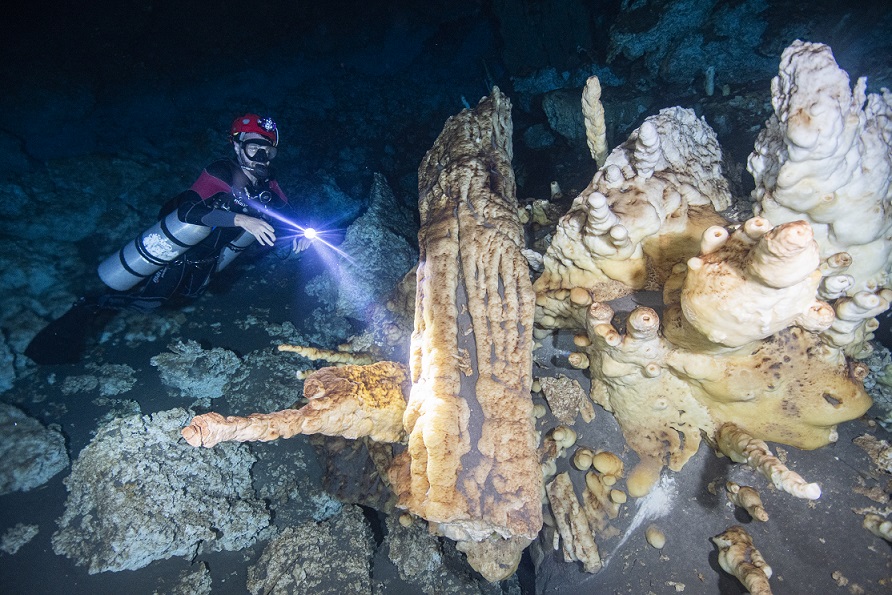 As said before, Jacques Cousteau was so impressed with the Wakatobi archipelago and the dives he did there that he named the archipelago underwater nirvana and declared that he had the most beautiful dives of his life. The colors and the density of life are impressive and this destination has nothing to envy to the other most famous destinations in Indonesia.

As the islands are made of limestone rocks and most of the fresh water is underground, there are many caves there and rivers or streams are absent from the surface. This therefore limits the intrusion of sediment into the sea, making visibility particularly clear throughout the year.

The water temperature ranges from 25 ° C around August to 30 ° C in October. And although the destination is not known for large pelagic animals, manta rays and whale sharks are occasionally sighted. Moreover pilot whales can be sighted between November and April. On the other hand, throughout the year, hundreds of dolphins roam between Wangi-Wangi and Kapota, offering an incredible spectacle every day at sunrise.

The underwater conditions are therefore ideal In addition to the incredible visibility, most of the sites are little exposed to currents, making the dives easy and open at all levels, from discovery to technical divers.

By the way, let’s talk about depth. The islands are surrounded by drop offs with dizzying depths (several hundred meters) and no one has ever reached the bottom. We are just starting to explore the post 60 meter area and we are constantly discovering new sites and new aquatic wonders. The easy conditions and the great depths give all the keys to turn Wakatobi into a new Eden for technical divingand Sulawesi Dive Trek has all the necessary equipment for safe deep dives. Booster, compressor with Lawrence Factor Filter, Oxygen, Helium, and sorb, everything is ready to welcome tec and ccr divers.

Each of the islands has dozens of dive sites. We operate from Wangi-Wangi and organize boat trips around the island but also seafaris that will allow you to discover the other islands. We dive and travel around the islands with our locally designed wooden boat specially equipped for the comfort of divers. Visit this page for more information about these trips that will allow you to discover all of the archipelago’s islands and their dive sites in the easiest and most comfortable way. We take care of everything from your arrival until your departure from Wangi-Wangi Airport.

If diving in the open sea bores you or you want to broaden your horizons, Wakatobi holds many underground secrets. As in Mexico, the islands are crisscrossed by underground rivers that can be accessed through openings in the ground, named sinkholes. Like Cenotes, our Goa (indonesian for cave) will impress you with their decorations, stalactites and stalagmites and the mysterious nature of this type of diving. We are the first to have explored these submerged underground networks and are the only center in South-East Asia to offer this type of diving, open to all level of divers.

In conclusion, diving in Wakatobi is an extraordinary experience and a trip to the archipelago is an once-in-a-lifetime experience. We are the only diving center in the area to offer dives and diving courses with English, french, spanish and indonesian speaking instructors. Due to the remoteness of the area, our services are not limited to offering only diving to our visitors but we can manage everything from A to Z to make your trip as pleasant as possible so do not hesitate to contact us to design the trip of your dreams!